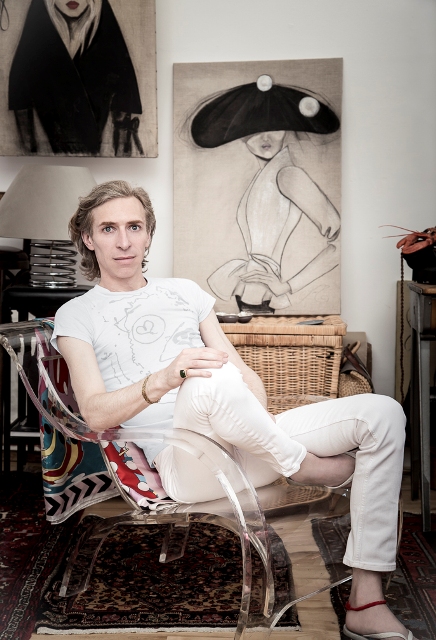 Emotions, a powerful creative energy, humility, genius, modesty and positivity, a generous and bright personality shines in Marko Matysik, special individual and smashing eclectic creative with whom I was pleased of talking about, amazed and happy of sharing ideas about fashion, creativity and contemporary times. To talk about Marko and introducing him and the works he make properly it’s not so easy, being Marko a volcano of creativity, arisen since his childhood – age when he passed the time making paper princesses as gift to his mother’s friends, spent travelling around the world with his Anglo-German hotelier parents and absorbing the minutiae of jet-set life. Later he graduated with honors at the London St. Martin’s school of Art and started dressing princesses, working at the Victor Edelstein atelier ( the preferred couturier of Diana, the Princess of Wales). Then he established his own label “Marko Matysik” in 1995, working in Paris and London in the realm which is his passion, the couture and continuing  working for many private haute couture clients internationally under this label – including the making wedding dress for Tamara Beckwith and an accessories collection presented every season in Paris at Colette, belts being something which goes beyond belts, about whose I recently talked, created by joining antique ribbons, fabrics and buckles from the 15th to 18th century, giving rise to luxury creations collected by personas as Madonna, Donatella Versace, Karl Lagerfeld and Daphne Guinness.

Luxury, a luxury idea which is quite far away from the idea of luxury embodied in most of luxury brands’ commercials and in their logos impressed on the items they made, it’s the genuine idea of luxury which is the one developed through his work, connected to the idea of uniqueness, timeless elegance and style, embodies a refined craftsmanship and precious materials and successfully makes concrete creativity under the sign of its free expression and experimentation. In fact art is the main feature of Marko’s creative process in the realm of fashion as well as in other realms connected to that he explores as fashion consulting (for companies as Belmacz, Boudicca, Krizia, and also as creative director for Marie-Helen de Taillac) styling, fashion illustration, and fashion journalism (as editor in chief for Big Show, contributing fashion editor for World of Interiors, Drama and Vogue worldwide magazine, including a monthly page in Vogue Japan and Vogue China) by using of an emotional approach and care for detail. That is the exploration of the same field, the haute couture and luxury by using another medium and holding the same artistic approach.

That is what shines in the series of painting he made, works commissioned by Vogue China, turned into illustrations featuring along with photographs and interviews he made in an editorial on couture fashion week, genuine artworks that were exhibited by the London Fashion Illustration Gallery,  an agency owned by William Lyng ( Marko’s agent) at the London Mayor Gallery (in 22A Cork Street). A smashing creative energy and the beauty of an precious individual who celebrates and successfully makes concrete fashion and elegance as an artwork it is what is embodied in the following interview, arisen from a marvelous conversation with Marko Matysik where he generously talked about himself, telling about the core of is work, its creative path and forthcoming projects.

How did you start working in the realm of fashion?

“Since I was a child, at age of 4 I was obsessed with princesses since I was a child, at age of 4, I designed dresses having bows, I loved everything which shined. One day a friend of my mother who saw my sketches told me: “you will become and you will make my dresses”, but I still wasn’t conscious of that, of what I would wanted to do when I would has been older. I was fascinated by suggestions, colors when I go out, walking on the street, I looked at the shops windows and I set up a shop window for a boutique at the age of 11-12, a fantastic experience I continued doing for two years. Later, I showed at the age of 13 my sketch book to Manfred Schneider, a very famous couturier in Munich, I landed my first job as design assistant and I became a luxury addict. Then I studied at the London St. Martin’s School of Art and after I graduated I started working for Victor Edelstein and later I created my own brand.

Beyond that I started working in the realm of fashion journalism and illustration. That has happened for random. Since I ended the St. Martin’s, a friend of mine I saw during a party, a fashion journalist told me he had to cover fashion week, go to the fashion shows, make a reportage and he didn’t feel like doing that, therefore I told him: don’t worry, if you want I can do that. Thus all that started. Having already my clients I felt myself like outside reality, therefore that has been a successful chance for me to enter into the reality. Resulting also from that I made illustrations for Vogue”.

What is the leitmotiv – if there is a leitmotiv or rather an element – joining your different creative expression you make concrete as illustrator, fashion writer and fashion designer?

“It’s the creativity, the freedom of experiment creativity without limits. That is one of the reasons for which I love the realm of haute couture. Here I am not responsible for a huge office, a huge staff, I don’t deal with a big pr office, I have less limits in terms of creativity and designing. Nevertheless I never desired getting a huge studio, I prefer being selfish in this sense and standing alone, the collaboration is important, but I prefer – it’s a privilege – working by myself, as I don’t want being responsible to manage a big team. Thus it has also happened with the work which has commissioned to me by Vogue China concerning the haute couture fashion week. It has been a privilege for me after the hectic rhythm of haute couture fashion week and its magic working for a month on the paintings and spending my time at the Nicholas Bernstein’s studio – placed in the area of Hammersmith – with whom I collaborated where he would painted then I would painted on top or viceversa. He – who hasn’t a classical background –  inspired very much my work which has been something spiritual, to paint has been a kind of escapism, having spent one month alone painting, a medium which is more different than drawing. To use oil on canvas, instead of drawing, also reaches the spread of color in the studio where you work, as the Nicholas’ studio which is full of color spread in the room. Anyway to paint has emphasized the magic atmosphere of haute couture fashion show I had the privilege of seeing. An escapism which make you feel safe. There is a big magic and creativity in the dream-provoking couture and also in its backstage. In fact the backstage is what I cover in my reportages, as I like to look at a garment, touch it, feel how it’s a dress, the movement it makes and it is a magic and the sound a fabric makes as the paper taffeta is an emotion. I consider myself as a privileged one, having the chance of seeing periodically my little fashion family and being able of enjoying all that.

Coming back to the theme of fashion, I am focused on the field of couture and luxury, as this realm has many potentialities in the free creative expression and experimentation, instead the ready-to-wear reaches more compromises in order to create something which pleases to more people. And it’s a big pressure for me having more people to satisfy, I have my commissions that make all that more spontaneous, fun and free, having just only two or three women on mind, one client to satisfy who is happy for what I make and makes me happy for what I make.

Concerning my collection of belts – as the silver chatelaine, which is available at giftlab.com -, it has arisen spontaneously, it is also connected to something emotional, though is the result of a detailed search for textiles, materials and ancient and contemporary decorating elements in the realm of belts. It’s an emotional experiences as it arises from going out and visiting Carol Graves Johnson, specialized in belts and owner of company Cingular, going to her house which is on the other bank of Thames. That is connected to something emotional, the joy which arises from seeing Carol and working together on the belts.

Considering the leitmotiv of my work and its designing process, the main purpose is to give a deep, meaningful dimension, something having a soul, it’s not only about to give something which is new, it’ s all about that, it’s about many global influences and it’s about it’s all about being part of this mélange of periods of times and of details. I am incredibly curious, I research on the background of my project to get the happier result. I am more connected to the art environment and I think the most enjoyable thing is to inspire others. Instead thinking about what I create the leitmotiv is being feel appeal considered I tend to specialize in items for people that already have everything”.

What are the forthcoming projects you are working on?

“I am art directing a video, styling two shoots, making an Haute Couture soft trouser suit with coat and blouse and starting up super chic accessories collection (gloves, hats and other items) created by upcycling and I am making the monthly diary page for Vogue Japan”.